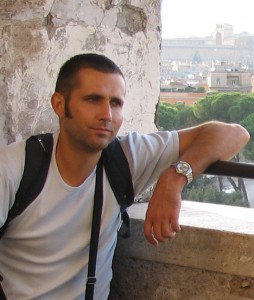 2001–2008 PhD in ethnology, University of Debrecen, Faculty of Arts, Department of Ethnology

1999–2000: MA in socio-ethnolinguistics at “Babeş-Bolyai” University, Faculty of Letters, Cluj-Napoca.

1995–1999: BA in in Hungarian Language and Literature – Ethnology at “Babeş-Bolyai” University, Faculty of Letters

Position and function: teacher of Hungarian language and literature (1999–2001)

Economy and way of life – course and seminar

Strategy and mentality – between traditions and modernity – course and seminar

2001–2008      researches in economic anthropology on the autonomous institutions that organize the economic life of the communities and the reciprocal work (FeernicValley, TârnavaMicăValley, Trei Scaune Region)

2004–2008      The forms of the locality (production of locality), the changing structures of identity in the context of the national and regional level

1999–2000      Micro-research on speaking about and representations of gypsies in a community, economic relations between Gypsies and Hungarians

1995–1998      Founding member and editor of Perspektíva, the weekly of the Hungarian students in Cluj

Feb–Jun 2010  Research fellow at the Department of Archaeology, History, Cultural Studies and Religion, University of Bergen (NO)

2004–2007      Individual research grant of the HungarianAcademy of Sciences

2003–2004      Research grant for workgroups of the HungarianAcademy of Sciences

Member of the Society of Hungarian Scientists and Scholars

2013    Cultures of mobility and immobility. 10th Annual Conference of the Romanian Society for Social and Cultural Anthropology (SASC), Sibiu, 17-19 October 2013, előadás: Strangers, locals and the production of local knowledge

2012       The German Diaspora in Eastern and Central Europe and the former Soviet Union. Durham University, School of Government and International Affairs. 22–23 June. Presentation: The German neighbours: culture, economy and ethnicity in a Transylvanian micro-region

2011       Creativity and inventions in the household economy. Presented at the 17. Seminar of Hungarian Ethnographic Society. Veszprém, October 21-22, 2011.

2009       Conference Series on Theoretical and Practical Issues of Built Heritage Conservation – Tusnad 2009, ARMIT – Colţeşti, 27-28 May, (The use of family buildings as form of socio-economical adaptation)

2008       Orientation in the Occurrence. Interdisciplinary approach to the complex cultural processes. Organizer: Department of Hungarian Literature, Babeş–Bolyai University and Department of Modern Literature, University of Pécs, Cluj, 17–18 of October (Presentation: How does ethnography shape between events and ethnographic Interpretation)

2008       The changes of the roles and the forms of the communities in folk society. Organizer: Hungarian Ethnographic Society, Szeged–Domaszék, 17–18 of April (Presentation: Ideologies and demands related to community. The change of the rural economy through to prism of an association)

2008       “Eye – Vision – Look. The opportunities of the observant” University of Pécs, Cultural Studies PhD Program. Pécs, Hungary, 28–30 of March Presented paper: “The Expropriation of the Story in Ethnographic Interpretation.”

2006       “Subcultures – definitions, typologies. Case studies.” Department of Hungarian Ethnography and Anthropology, Babeş–Bolyai University, Cluj-Napoca, 24–25 of May, Presented paper: “Dupa garduri [Behind Fences] – the Other Side”

2005       NGO-s in public sphere. The 3rd conference of FIKUSZ. Organizer: The Federation of the Young Scholars. Mezőkövesd, Hungary, 22–24 of September (Panel: The role of the NGO-s in the scientific research)

2004       “The cultural faces of Cluj-Napoca”. Conference organized by the University of Debrecen, Department of Ethnology, Academic Committee of Debrecen. 22–23 of November. Presented paper: Visible and invisible places in Cluj-Napoca.

2004       “Identities in the Carpathian Basin” – International conference organized by the Hungarian Academy of Sciences – Minority Research Institute, Budapest. 14–15 of November. Presented paper: The representations of identity and the (informal) economy.

2001       Problems in ethnologic research of Trei Scaune Region. Conference of Ethnologists, organized by the Museum Association of Kézdivásárhely, Kézdivásárhely. 23–24 of February, Presented paper: Boundaries and the Reproduction of the Boundaries in a Transylvanian Community.

2013    Does the Countryside Still Feed the Country? Producing and Reproducing the Rural in Transylvania. In: Luís Silva, Elisabete Figueiredo (eds.) Shaping Rural Areas in Europe: Perceptions and Outcomes on the Present and the Future. GeoJournal Library, vol. 107. 165–180.

2013    Agriculture, Work and Products: The Effects of the Market on the Economics of an Agricultural Settlement. Acta Ethnographica Hungarica 58 (1), pp. 163–176.

2012    Where Are the Tourists? Shifting Production, Changing Localities in a SzeklerVillage In: A. Boscoboinik and H.. Horakova (eds.). From production to consumption. Transformation of rural communities. Münster–Zürich: Lit Verlag: 63–78.

2011    “How could we know what we used to be?” Souvenirs, Salespeople and the Objectivation of National Memory. In: László Mód– András Simon (eds.): National Identity, Cultural Heritage, Memory and the Ópusztaszer National Heritage Park. 2011. 87–102.

2009    How does the story take shape between events and ethnographic interpretation? In: Berszán István (ed.): Orientation in the occurence. Komp-Press, Kolozsvár, 85–94.